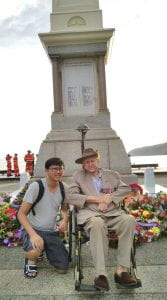 April 25 is a big day. I joined the Anzac Day ceremony. It was my first time. I woke up at 4:30am. When I came to the ceremony at 5:20, the sky was very dark and everyone was speaking very quietly. The ceremony started at 5:30, I saw no one using a cell phone. I was so surprised. A lot of people gave speeches during the ceremony. Suddenly, I heard the horn ringing. It was a trumpet. A girl was playing the trumpet. The song is called THE LAST POST.

When the service finished, a lot of people took pictures in front of the monument. I saw an old man sitting in the wheelchair. He put down a flower in front of the monument. I asked him, “Can I take a picture with you?” He said yes and he told me his story, but I couldn’t understand what he said. I just understood some words like ‘machine gun’ and ‘hard work’. I imagine he was talking about the war. During WW2, a lot of people died. It’s terrible. Lest We Forget!