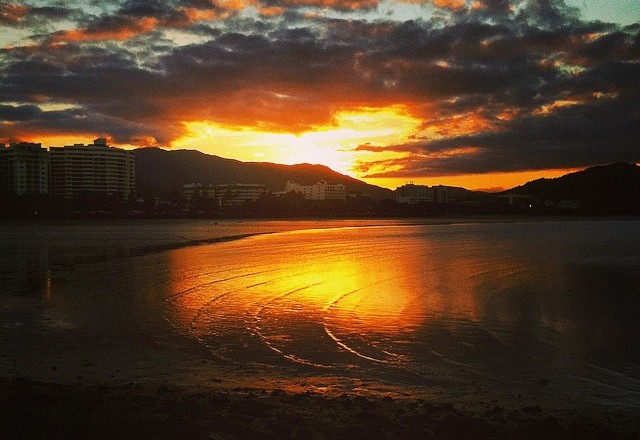 Located in Far North Queensland, I am currently studying in Cairns to get an English certificate. I made the choice that Cairns would be the best place to improve my English. At first, probably because I really love the atmosphere reigning in town, it is so lively! Secondly, lot of facilities have been made for sightseeing convenience, but also beneficial to the local population.

This place is just amazing to make my English perfect. I have got the opportunity to meet so many people at the school, from different nationalities, who are all travelling around the world. What more could you want!

Well-known for its good diving conditions on the Great Barrier Reef, but also for the most ancient rainforest in the world, Cairns is a long and beautiful journey of 2040 km from Sydney. Populated by almost 151 021 inhabitants, Cairns has a such a beautiful landscape! It is the centre of lots of natural beauty. With its waterholes, it gives you happiness to have a swim in the fresh river water, which is really nice during the hot season.

Moreover, you can do many activities such as mountain biking, and have a choice of riding different levels of tracks from the foothills. You also have the opportunity to do hiking, to survey the rainforest and its many different tropical species of trees. You will also have the opportunity to have a look at the Great Barrier Reef from anywhere you want, all along the shore.

Since I came here, a few travellers were complaining that the city is boring due to its small population. They also didn’t like the unemployment which has increased over the last couple years. In addition, they were also disappointed by the rainy season, which is humid and very hot less than six months a year.

I have been living in Cairns for a year now. Until today, this city has never disappointed me. Its landscape and its activities are extraordinarily diversified. In my opinion, it is also the friendliest city that I have visited in Australia. If you go to Sydney, you will understand that the feeling is totally different, due to the overpopulation and the difficulty of getting around, caused by traffic congestion and pollution.

Anyway, it’s up to each of us to form an opinion!

Renaud, French student at Cairns College of English and Business