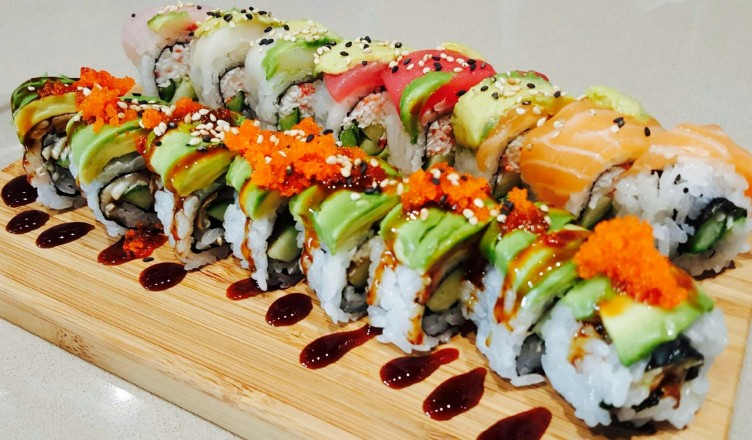 It is widely argued that Sushi is one of the most prevalent dishes on earth nowadays. Even though I’m Korean, I can certainly say Sushi, which is a representative dish of Japan, is my favorite food.  Not only is Sushi mouth-watering, but it also has history and culture.

I met this little joy on a small plate, when I went to a sushi train shop when I was 6 or 7 years old. It was the first sushi train, as I remember, in my hometown because it wasn’t so common in that time.  When I entered the shop, which had a Japanese-style interior design, to a greeting from a clerk in Japanese welcoming my family, it was fancy enough to attract the young me. Yet what appealed to my mind strongly and still has remained in my memory were the delicious-looking sushi and plates that contain sushi. If I had known that colors meant the prices of dishes, I would have been impressed by just that. Anyway that dinner was inscribed as the finest memory in my brain.

What contributes to its popularity is its flexibility as well as its amazingly attractive taste. Needless to say, it is undoubtedly tasty, but, what is more, it has an adaptable form. In the case of my friend, although she doesn’t like fish, which is the basic ingredient of original form of sushi, she can enjoy sushi with beef or chicken, thanks to its wide range of cuisine. To be more extensive, it has been transformed and adapted to the taste of people all over the globe regardless of cultures.

It is commonly believed that sushi originated in Japan. However, that is a typical misconception: the history of sushi that we know these days began around the 8th century in Japan. The original type of sushi was first developed in Southeast Asia as a means of preserving fish in fermented rice. In the Muromachi period, people began to eat the rice as well as the fish.

Regardless, it is the most well-known dish and I’m really looking forward to meeting this various and fascinating bliss again throughout my life.