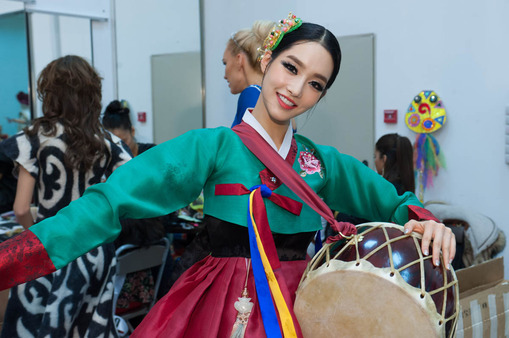 Do you know traditional Korean dress? We call it a “Han-bok”. Check out the slide show below to get an idea of what a han-bok is:

Normally we wear it on holiday or on special days.  For example, when you get married or on Thanksgiving which in Korea is called Chu-seok). Even Miss Korea was wearing a “Han-bok” in Miss Universal competition.

But these days, not many Koreans wear a “Han-bok” compared to the old days because it is expensive and a lot of Koreans also think that it is not useful. So most Koreans just rent it.

And I think a “Han-bok” and a “kimono” look similar to each other. In the photos on the left and right is a friend of mine, Nanami, wearing a Japanese kimono.

I hope a lot of Koreans wear their “Han-boks” more often as soon as possible.