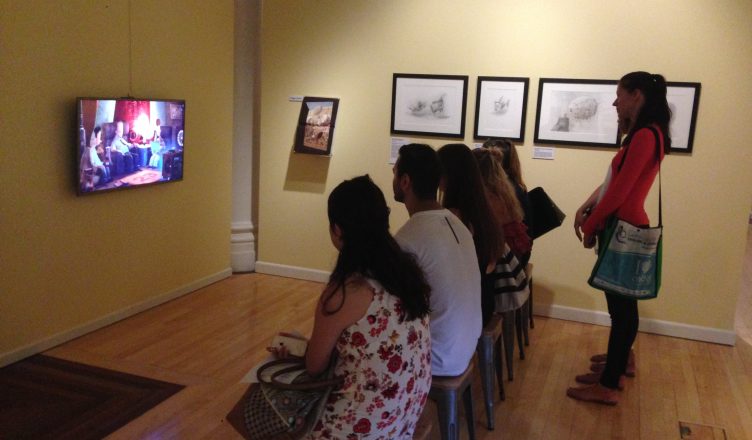 Here at CCEB students have a speaking assessment every Friday. Sometimes their teacher asks them to prepare a PowerPoint presentation.

Here’s a presentation Rena and Vitor (Intermediate Class at the time) prepared as a follow-up after their visit to the Cairns Regional Art Gallery. It was done in a Pecha Kucha format, which means it included 20 slides changing automatically after 20 seconds. The students included the photos they had taken during their school visit to the art gallery. Vitor and Rena presented their chosen works of art and expressed their opinions on them. They used a lot of art-related vocabulary (in bold print in the text below). Well done!

Check out their presentation below and the transcript that goes with it:

1. “Utopia” was painted by Shaun Jan and it’s acrylic and oil on paper. It isn’t very colourful, but you can still see some colours. The style of this painting is abstract and it has some strange things painted all over it.

2. The title is ‘The statue’. I’m interested in these two pictures. We can see the process of the film scanned from the original painting made for the book and then digitally modified to appear in the film.

3. “Utopia Landscape” is basically the same place as the other one, but this painting doesn’t have any strange creatures, but it explains, with short texts, how the place is organised.

4. The title is ‘LB-1980 obstetric metallurgist, texture guide’ This is a digital print. It looks like a kind of insect because it has wings. But it has a magnifying glass and its body is colourful so it’s strange but funny. I want to see it in the real world.

5. The Creatures of Utopia are many paintings of the characters of Shaun’s Jan movie. They are so confusing and odd that I don’t really know how to explain it, because they have many different parts instead of human parts.

6. The title is ’Father  and child’. It is made of found oil cans and iron pigment. They look like a father and a son because they are different sizes. The small one looks childlike, and the big one looks calm.

7. “The Mammals of Australia” was painted by John Gould and he is the best known of all the 19th century illustrations of Australian fauna. The painting is very intriguing and fascinating because the painter focused on the details and it’s a beautiful piece of art, that’s why he was the best of the time.

8. This is a short film called ’On the bridge’ by a Korean artist. At the end of the film she dives into the river. My friend told me that many people kill themselves from this bridge. So I understand the meaning of the end of the film. I’m shocked to find out about this.

9. “Au Koskerr (senior lady) and Pedaukowa (uncle baldy)” was made in 2012 and it was a gift of Robina Casser. The painting was made with stoneware, raffia, found objects and cord. To me it’s very odd, disturbing and depressing, because both structures have angry and scary faces.

10. These pictures were drawn in 2017 so they are new. The type of work of art is watercolour on paper. They show ancient times. I think this is an ancient ceremony.

11. “Animals of Australia” was made by Livingston Hopkings, Leroir Marks and Johan Doyle. They used wood engraving on paper. The painting is very disturbing and odd, but intriguing, because it’s “neither as Opossum nor a kangaroo but having something of both” (that`s what it’s written under the painting).

12. We can see many kinds of animals. The type of work of art is carved stone. I think the picture was vivid in the past but now it has faded.

13. “Goodenough Bay” was made in 1959 by James Marrisom and he used oil on linen, the painting has so many colours which are very vivid, making the people happy and hungry, because all the painting is about food.

14. This is the first kangaroo picture. It is a monochrome. It’s a professional picture.

15. “The Chairs” of Lorenzo Kitchell, Lunete Griffthi, Jimmy K. Thaiday, Nancy Navoir and Eden & Wade was made with cotton and wood, but just the upholstery is painted. The painting has so many colours and they are all different, making it very unique.

16. This work of art is wood cut and it shows animal shapes. Some are patched with geometrical wood patterns and lines.

17. The Bats “Nyctophilus geoffroyil”, “Nyctophilus major”, “Kystacina Tuberculata” and “Molossus Norfolcensis” was made with prom nature and oil on stone by B. Waterhouse Hawkins and to me they look very weird and ugly, making me disturbed.

18. At first I thought this is a balloon, but it is in the sea. It looks like the fish have faces which show their feelings and only the fish are colourful. Without the fish it would be a monochrome.

19. Those fish were made with watercolour, with abstract details, because they are not detailed. The painting was made by  Erub Erwer Meta (Darnley Island arts centre), located 160 km north east of Queensland’s Cape York Peninsula. In my opinion, the painting has a vivid blue colour and it’s very peculiar.

20. The type of work of art is watercolour and charcoal. At first I thought the same person drew both pictures because both have animals such as ammonites are very limited.

How do you think Rena and Vitor did? We think they are art experts now! Awesome presentation!