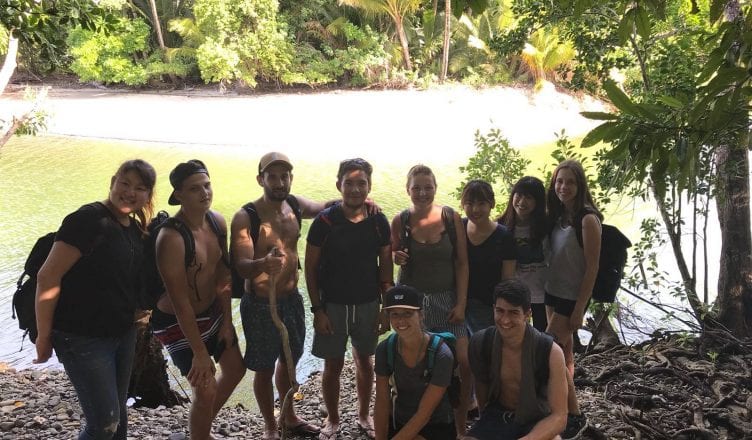 I went on a Rainforest Tour for 2 days. I’d like to tell you about my short trip.

Some CCEB students took part in this activity. We met in front of school fifty to seven. It was early morning so I was very tired but excited!! We took a bus. First, we went to Port Douglas. It took about 2 hours from the school. I saw a beautiful ocean from the bus. 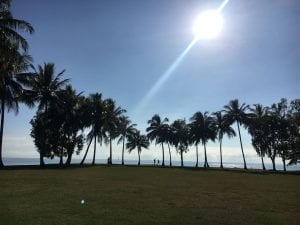 Then, I walked around the town. The town was fashionable with a lot of stores. We also looked at ocean. There were palm trees near the ocean. It was a nice view so we took a lot of pictures.

Later on, we went to our backpacker’s. It took about an hour from Port Douglas. We stayed at PK’s Jungle Village. I stayed at a backpackers for the first time. The accommodation was in nature. My room was very clean, and the nature was very beautiful. I saw a Ulysses Butterfly many times.

We walked to a beach near our backpacker’s. We couldn’t swim in the sea because of crocodiles. We took a rest on the beach and I had lunch. After that, we walked in the rainforest. I was a little bit scared because crocodiles live there. But we went into the rainforest and nature was beautiful.

While we were looking at a view, one of student spotted a big crocodile. It was on the island surrounded by the river. It was sleeping. We were excited!! I didn’t think that I would spot a  wild crocodile.

In the evening, we cooked tacos. The ingredients included tomato, avocado, chicken, cheese and lettuce and so on. It was absolutely scrumptious!! 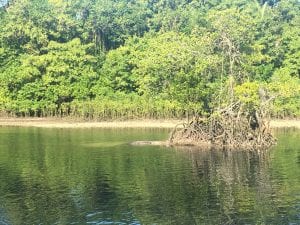 On the second day, we went to a water fall near our backpackers. The water was very clean. There were a lot of fish. Some students swam in the water. After that, we went to the beach again. We climbed a rocky stretch next to the shore. The scenery was very beautiful. I took a lot of pictures.

Then, we joined a Daintree River Wildlife Cruise tour. The aim was to spot crocodiles. I took a boat and looked for them. We also saw a lot of mangroves. Finally, we found a small crocodile. It was swimming in the river. I was excited because it was so cute.

On these 2 days, I made a lot of memories. I made many friends and I was in nature.

I really recommend a Cape Tribulation tour. If you want to go, you should go to CCEB travel desk to book!!