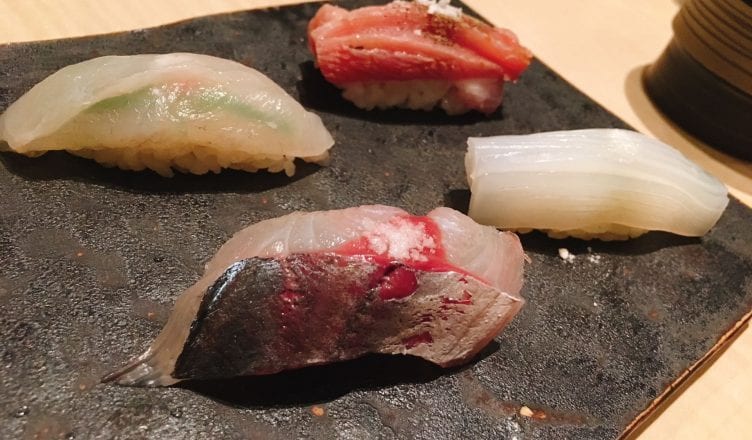 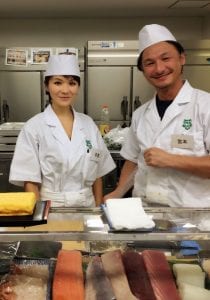 I got my diploma as a Sushi Chef in 2015, so I would like to explain to you about sushi, especially ‘Nigiri-zushi.’ The sushi contains wasabi, which is Japanese horseradish, dabbed onto the fish or shellfish, and placed on top of shari, which is just another word for vinegared rice like sumeshi. In the beginning of the 19th century, this form of sushi started to be enjoyed as a fast food that was eaten standing up at outside street stalls. In those days, sushi was as big as a tennis ball. Nigiri-zushi became known as Edomaezushi because it was made with seafood caught from the bay near Edo, today known as Tokyo. Mr. Yohei Hanaya is recognized as its creator.

Having sushi at the sushi restaurant, please don’t wear strong perfume. Taking a seat at the counter is the best to enjoy watching the chefs’ at work and talking with them. People usually eat nigiri-zushi with their hands as sushi was traditionally eaten by hand. You don’t need to worry about your hands, as you will be given a hot or cold towel and special hand wipes. You can of course use chopsticks as long as you do not soak the rice with soy sauce. The chef always considers the total balance of topping, shari, soy sauce and atmosphere. Sushi is a kind of work of art for the chef. When sushi is put in front of you, eating it promptly is very important, and it’s better to eat sushi in one mouthful rather than biting it in half. However when you eat big sized sushi, you can bite it in pieces. Otherwise you might choke! About drinking, I recommend sake which doesn’t interfere with the taste of sushi, particularly, Junmai and Honjouzo type of sake. Atsukan, hot sake, is also very good paired with sushi.

I hope you all will enjoy sushi!

4 thoughts on “Do you know anything about sushi?”