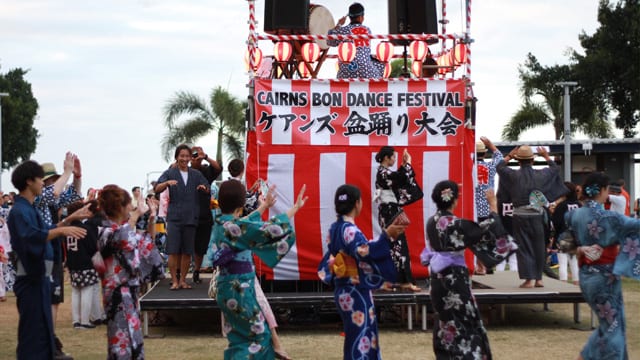 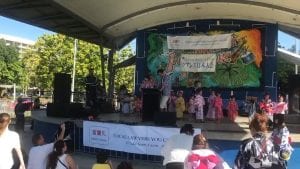 I volunteered at Cairns Japan Bon Dance Festival on 2nd September. Bon Festival, which takes place every summer, is a Japanese Buddhist event during which people honor their ancestors. My role was a Master of Ceremonies. My study abroad staff appointed me for the role a few weeks before. When I heard about it for the first time, I was really surprised!! However, I have some experience of being a Master of Ceremonies. When I was a high school student, I joined a broadcasting club. 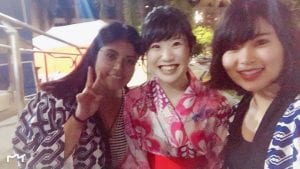 Since I was able to contribute to the event, I wanted to do it. I joined the meeting and got the texts of the speech before the festival took place. When I joined the meeting, I noticed the event was bigger than I had thought. I thought to myself “Oh my gosh!! Why did you accept this role?” I had been practising my speech until that day. On the day of the festival, I was wearing a kimono (a traditional Japanese outfit). Even while arranging my hair, I was practising my speech. I was really nervous.

That day the weather was very good so I expected many people at the festival. At 2 pm, the festival started.  Before talking in front of the audience, I felt tense. However, once I started talking, gradually, I was able to calm down. Then I got used to being an MC. I really enjoyed doing it. And I could also watch exciting performances, for example, Wadaiko, Bon Dance, Mochitsuki and so on. I think that it was a good chance to let Cairns residents get to know Japanese culture.

In the evening, Fogarty Park was crowded with festival participants. The atmosphere of the place got lively. At last, many participants and staff who were there came together and we enjoyed the dancing. The event was a big success.

I was glad that I could engage in this festival. It was a good experience for me.