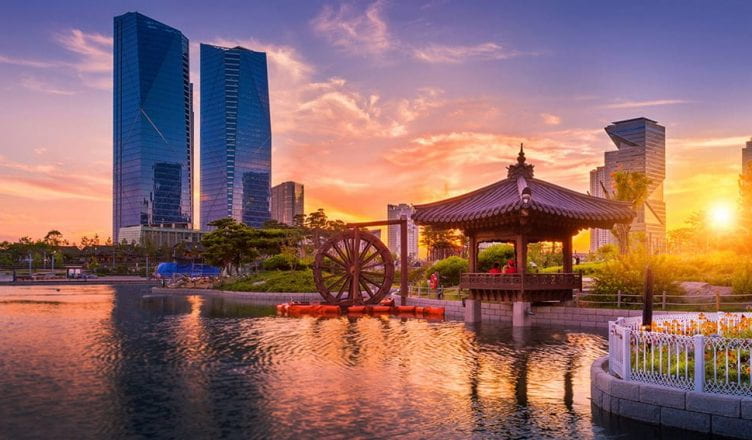 This is Robyn’s class presentation from Friday last week. Feel free to flick through the slides and read the descriptions below:

When you visit Korea, Seoul is the place which has always been recommended. This is the most important city since it is the capital of the Republic of Korea. It is a smaller area in contrast with other countries, however it contains a lot of culture such as history, fashion and food.

This is the place where the latest Korean royal family lived from 14th to 20th century. It is located in the heart of Seoul. We call it “Gyeong-Bok-Gung”. It means “May good fortune smile on everyone in the country.” Recently, there are many people who visit the palace as it is free if people enter dressed in traditional costumes.

If we have King’s house, we also have people’s houses. “Buk-chon’ is the name of the area, and we call “Han-ok” a traditional type of houses. Actually, this town was built for high-class people a long time ago, however it is just a well kept village where common people live now. Besides this, it is a place loved by young people.

If you want to see a nightscape in Seoul, it is a good way to go to “Nam-san” tower. It means ‘the tower of mount Nam’. You can take a cable-car (or sky rail) which costs $10 round trip. This tower has several restaurants, which gives you iconic experiences since it can rotate 360 degrees.

As Korean people love to party and eat, the culture of food & beverage has significantly developed. This area, called “hong-dae”, has many restaurants and has a variety of food. In my opinion, we are very generous with drinking alcohol, and therefore you may find it easy to drink all day and all night.

Korea is well known for its reasonable shopping prices and quality. This area, called “Dong-dae-mun”, is a popular place for buying some good clothes. Moreover, there is a traditional market, which is huge. As it is one of the biggest market in Seoul, it is always crowded with tourists.

This island is not like the others. It is very small as it only takes a day to look around the whole island. As there are 4 seasons in Korea, “Nam-I-Seom” has asuperb natural landscape every 3 months. As well as this, the island is famous for its festivals, for example the cherry blossom spring festival, the summer music festival and the maple festival.

Gyung-Ju is a small historical city which is far from Seoul. The one of unique thing is the royal tomb. Gyung-Ju is filled with many large and small royal tombs which date back to 1,000 years ago. In addition to this fact, Gyeong-Juhas the most famous Buddhism temple which was built 1,200 years ago. The name of this temple is “Bul-guk-sa” and it became a UNESCO World Heritage Site in 1995.

“Bu-San” is the 2nd biggest city in Korea and I lived there for 2 years. It is similar to the Gold Coast due to its beaches. Also, “Bu-San” is very close to Japan, only 250km away from it. I love this city because its eating culture is marvelous. As it is a port city, it is famous for its seafood cooked using various recipes.

If you are a city person and want to get away from it all, I would recommend that you visit “Je-Ju” island. It is a volcanic island which is surrounded by beaches and cliffs just like Hawaii. If you like hiking, “Je-Ju” island will be your favorite place owing to its 386 different kinds of hills.

2 thoughts on “10 most popular places in Korea”